Ever since it was announced April 10, 2014, I’ve been committed to making this my next mountain bike.

When the 2014 SaddleDrive event came around and Salsa started taking orders, I stepped up and told my local shop I was ready to order one. Unfortunately, my shop didn’t get its Salsa order ready for a little bit after that, so I couldn’t get a complete Bucksaw 2 (in yellow!) like I wanted. All that was left in my size on the preorder were some Bucksaw 1 frames. So that’s what I committed to. I hadn’t planned on building a complete bike, but I was roped into it so I started ordering parts.

I got the Race Face Turbine CINCH crankset before I ordered the frame because I knew I wanted to modify the stock build. 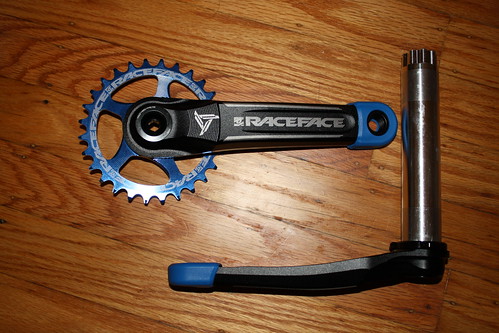 This brought me to ordering up the rest of the components. Biggest on my list was spec’ing out a wheelset. Fat bike wheels aren’t where regular mtb wheels are just yet. You don’t really have the option for respectable machine built wheels for reasonable prices. You’ve pretty much gotta have everything built to order still. Comparing the more basic Salsa/Marge Lite wheelset on the stock Bucksaw to nicer wheel builds, I decided to spend a little bit more on a nicer build. 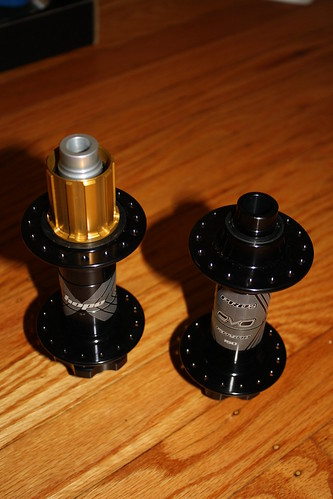 As for the rims, I took Salsa’s cue and stayed with “narrow” 65mm rims to keep trail handling of the Bucksaw well-behaved and cut down on autosteer. Here I decided I might as well just get the bike built how I want to start with so I went with carbon rims from Nextie. I ordered the 65mm Black Eagle rims just days after they officially went on sale. I was already on a wait list. My set shipped last week. I’ve read good things about Nextie’s customer service, and Brian has been extremely responsive to questions. I have also read about a couple of excellent CS/warranty issues that Nextie has handled extremely well, so I feel good purchasing from them. I had to keep some yellow on my bike, so I ordered glossy yellow rims with matte yellow graphics. 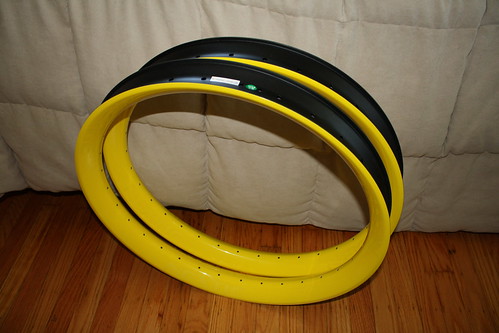 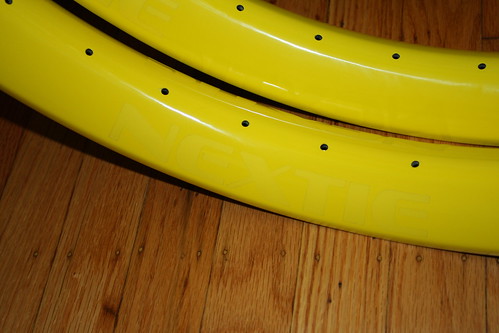 For the wheel build, I have chosen to have MikeC at Lace Mine 29 build them for me. While his site says he specializes in 29er wheels, he has a lot of very happy fatbike customers, and he also rides fat bikes all over in some very amazing places. I’m confident he will provide me with an outstanding wheel build.

I have a RockShox Bluto fork on the way, also. That takes care of the “Big 3” items for the bike.

For the drivetrain, I’ll be using Shimano, though I haven’t decided which level to use yet. I’m going to use a 1×10 drivetrain. I already have a 28t Narrow Wide chainring.

I had the opportunity to test ride a stock Bucksaw 1 and that has helped me work out some decisions regarding component spec for my build.

First, let me say that I love this bike. 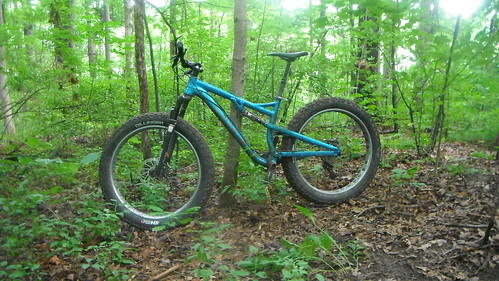 It suits my riding well. I’m not a racer. I like to motor along. I like downhills, and I like to work my way up the climbs, but I’m not a hammer. 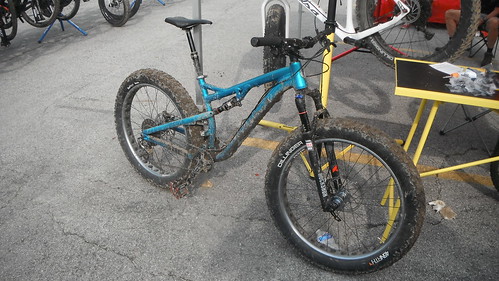 The Bucksaw I had was spec’d with a SRAM XX1 group and Guide RS brakes. The Guide brakes are nice, but I already have a fleet of Shimano hydros, so staying with that makes sense to me for service purposes. XX1 is also very nice, but that $400+ cassette hurts. $400 wear items are not my thing. Sure, I work in the industry now and have access to good discounts, but I won’t forever. XT cassettes have been solid, so I am going to use 10spd Shimano. What level I go with will depend on what’s available and how much I have to spend to get it, so it’s not terribly important what spec it is. I will be pairing the Shimano bits with some OneUp bits to make it all work a little better for me.

The stock Bucksaw I rode had a 30t cog, with the 10-42 cassette. With my 28t ring, I will get the same gearing with a 40t cog. Reports are that the 40t OneUp cog shifts a bit better than the 42t, which is good. I’m going to add the RAD cage to a med cage derailleur to make sure shifting is optimal for my build. With carbon hoops and lighter tires (stock tires for the BS are Surly Nates. I will be getting 45Nrth Husker Du’s for summer use), my build should climb at least as well, if not better. 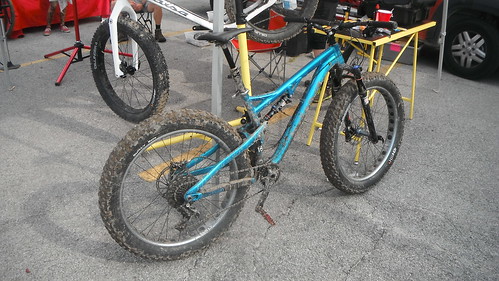 I really was thrilled with the way the Bucksaw rode. It accelerated a little more slowly than I’m used to, but that’s not a biggie. The wheel improvements on my build should make that even better. The handling was outstanding. I’ve ridden some fat bikes that steered like tractors. Salsa hit it out of the park with this bike. I had absolutely no autosteer, and in fact, the bike steered very confidently and naturally at speed.

I had a couple moments on the bike that really gave me a lot of information about the bike in a short amount of time. The first occasion involved taking a slick corner at speed. The trails had received a good bit of rain the night before and were pretty slick. I held back on speed quite a bit because of this. I really wanted to push the bike into the corners, though, to get a feeling for how it handled. I found one that I felt was appropriate and I let the bike rip through it. It was a little more slippery than I thought, which initiated a slide through the turn. Normally, I’m used to getting a faceful of dirt if this happens. Not so with the Bucksaw. The bike eventually slid out of the outside of the turn, but it stayed upright the entire time. A dab had me back on course. Whoa. I had to stop and think about what the bike had just done.

The other moment that really got me thinking about this bike was the first steep climb I took where I had to muscle the bike up the hill. On my current MTB (2003 Specialized Stumpjumper FSR Comp), I have to get my torso fairly far forward to keep the rear tire connected with the ground. Doing this with the Bucksaw caused the rear Nate to break loose. Hm. On subsequent steep climbs, I played around with my body weight distribution to see what the bike did under those circumstances. I found that the BS hooked up better when my body weight was biased more rearward. The front did not wander as I expected it to. After some thought, I realized that there are probably a couple sources for this unexpected behavior.

First, the bike geometries. The Bucksaw could not be more different from my current bike. For example, the Bucksaw has a MUCH slacker head tube, lengthening the bike compared to my old Stumpy. Also, I think the weight of the front wheel/tire helps keep the front end planted in the steeps.

I got about 10 miles of riding on the Bucksaw. I’d have ridden more, and I would have been allowed to, except I was started to get bored of the trails because they were a really dense network and I didn’t really know where I was going. I was just poking my way through the woods, winding up wherever I wound up. The creek was up and a bit too deep/fast to cross on a demo bike, which probably eliminated a decent amount of trail. Some of the trails were also a bit too muddy to ride. Not being familiar with the location, I called my ride a success and headed home with my new information.

Since my demo ride, it looks like Salsa has pretty much sold out of these, period. A few shops seem to have some coming for stock, but who knows if they’ve even sold them before they hit the sales floor. Anyone who wants one is going to have to wait well into 2015 before more are available. AFAIK, two frames will be coming to my city. I know the other guy getting one. I’m not sure about Salsa dealers in other parts of the state, but the dealer sponsoring the demo event appears to have one on order. A few days after the demo event, the owner of the shop where I work part time received a phone call from a guy in another city looking to order one. Sorry, bro, you waited a bit too long to make that phone call.

My rims should be arriving within the next week, so I’m excited about getting them built. Still no good idea about the expected delivery date of the frame. I’ve heard “September ship date” from some, but then “customers on the first ship window should get them in their hands in November” which leads me to believe that neither is wrong and that the bikes may be getting loaded onto the boat in China or Taiwan in September. I do hope I can get some fall riding in on this bike, but I should probably make sure I have winter tires on hand because it probably won’t be much fall riding.

One thought on “Riding the Salsa Bucksaw”