Chalk this one up to an initial oversight on ordering. I could have had one added onto my trailer when it was built, but to save a few bucks, I opted not to. I should have had one installed when it was built. But I had in my mind that since I had a couple of extra 20lb propane bottles already, I’d find a holder to put one on my trailer tongue. That didn’t work out how I’d hoped. I couldn’t find one that I could just buy and bolt on. Anything would have required custom welding for proper support, and I just didn’t feel like doing that.

I finally just accepted that an 11lb bottle was better, anyway, and it was just a matter of time before I bought a bottle rack and installed it. Again, I didn’t really have a good spot on the tongue that could hold a full bottle securely. The front of the toolbox on my tongue just isn’t sturdy enough to support the weight. So rear passenger side of the trailer is where the bottle holder was slated to go. I found a nice, sturdy aluminum one on Amazon made by PowerTank. It’s got rubber trim on it to hold the tank securely without rattling or rubbing, and it’s also lockable. 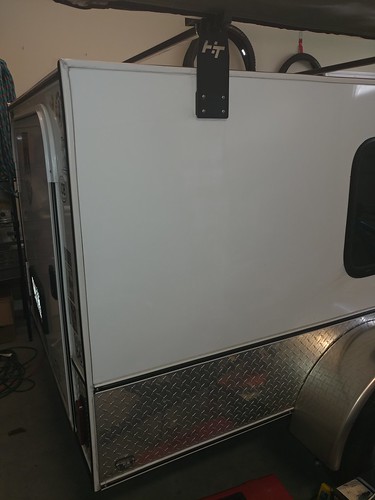 This is the spot I decided to mount the holder. Only thing to watch for is that there’s a shelf inside, so I had to do plenty of measuring to ensure that I had space for the big fender washers on the inside.

This pic shows several steps all at once. 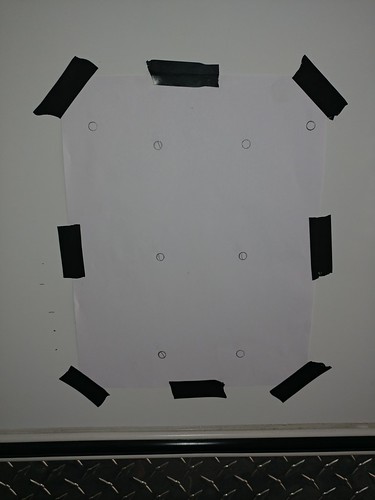 First, I cleaned the exterior of the trailer. The Hiker Trailer is clad in aluminum, so I just used a general multipurpose cleaner, since it gets road grime off a little better than plain isopropyl alcohol or similar. Then, I set the bottle rack on the paper and drew the bolt pattern on the paper. The little marks on the bottom left are from measuring the necessary clearance for the shelf inside the trailer, with 3/4″ of room for the fender washers. I used the level to ensure the trailer itself was level, and then that the bolt holes for the bottle holder were also level before I taped the pattern to the trailer.

I then tried to start the first hole, and then I realized that the drill bit wanted to wander a little. I needed the holes to be almost exactly correct, so the bolts would be flush and hold securely. So I stopped drilling and grabbed and old screwdriver that’s been turned into a punch to make dimples in the side of the trailer, to prevent the bit from wandering. 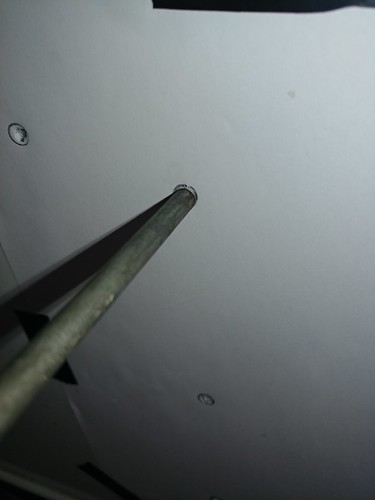 Of course, the paper tears a bit when drilling, but the holes drilled out nice and clean. 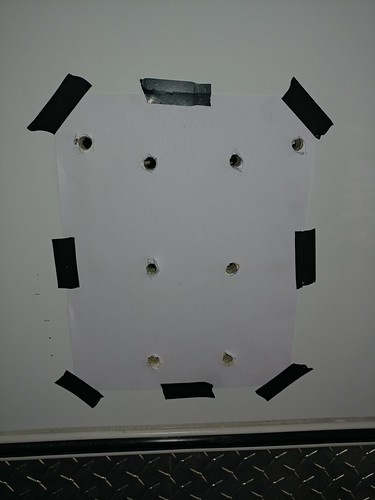 Next step was a quick dry fit to make sure that everything was aligned correctly. All the bolts slide into the holes well. I might have been able to use a slightly smaller drill bit, but I think 13/32″ worked fine. 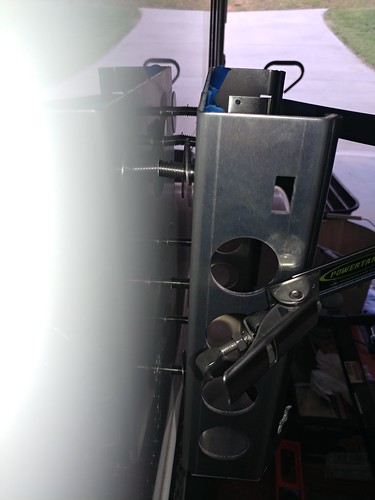 Next, I removed the bottle holder, and taped the bolt heads down so I could put it face down and put some RTV sealant down. I used fender washers between the rack and the trailer so the little rubber bumpers would have some space back there. 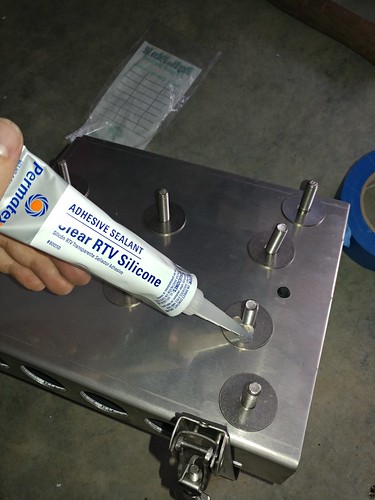 The tape on the bolt heads also made it a little easier to slide all 8 bolts into all 8 holes at the same time. 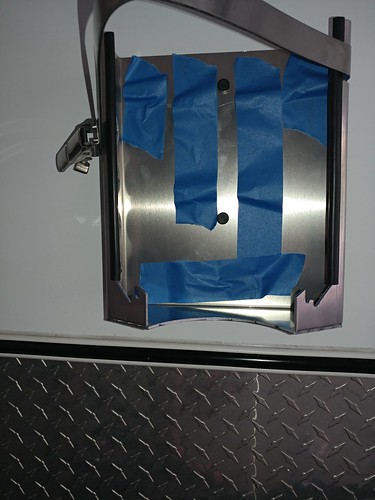 Put the remaining fender washers on the inside, followed by the nylock nuts and tighten everything down. If you have an eye for detail, you’ll notice 2 of the fender washers on the inside are a little smaller than the others. Yeah, that’s because I thought I’d bought 16, and didn’t realize until I got to the end of everything that I only had 14. So I had to make a run to Home Depot, and they only had 1 1/4″ diameter 3/4″ fender washers. I bought the bigger 1 1/2″ washers at Ace, but they were closed by now. 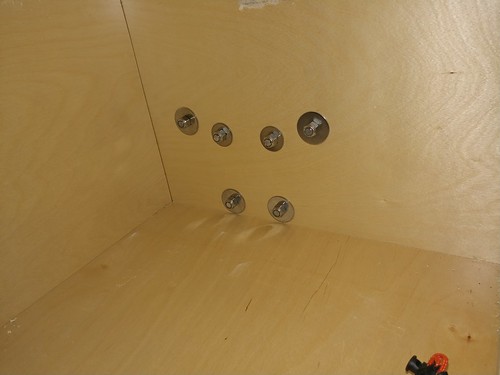 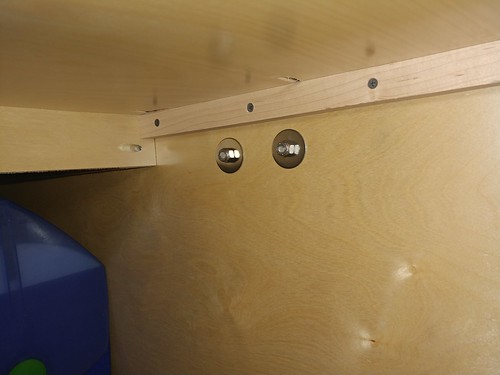 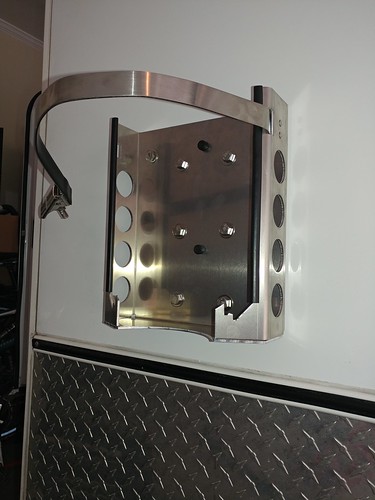 It’s worth noting that the strap on this bottle rack won’t fasten unless there’s a propane bottle in the rack. I couldn’t find 11lb propane cylinders anywhere within a reasonable drive locally, so I bought a Worthington 11lb propane bottle from Home Depot’s website.

The propane bottle finally arrived, so I got it filled at the local Ace Hardware and mounted it up. 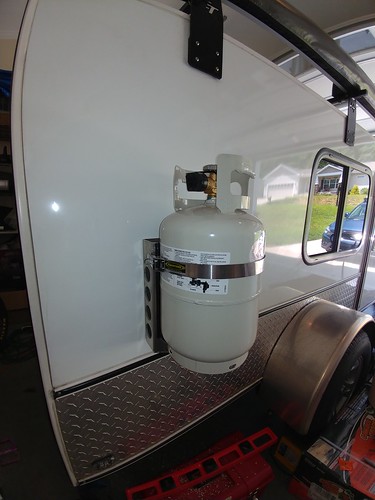 Initial impressions, however, are that this rack is STURDY. I can put a whole lot of force on it and rock the trailer around on its suspension, and the bottle holder doesn’t move relative to the trailer at all. The 11lb propane tank weighs 13.1lbs dry, so it’ll weigh less than 25lbs when full. Even with the bottle attached, it’s super sturdy. The bottle doesn’t rattle in the mount at all.

It’ll be nice having a refillable propane tank on the trailer. I won’t make as much trash from the “disposable” green 1lb cylinders, for cooking, for one. I’ll also have a bit more propane on board for other things. I have my eye on a Propex furnace, as well. The Hiker insulates pretty well, but without air movement, condensation becomes a problem when it’s cold overnight. In order to open the windows and ventilate the condensation, plenty of heat is necessary. A furnace that pushes warm, dry air into the camper will make a huge difference there.

On the flip side, I’ve found that the Maxx Fan on my Hiker is so good that I haven’t needed any sort of air conditioner.

My long term goal here is to enable fairly comfortable off-grid camping, so I wake up more rested, and ready to get out and do stuff like hike, mountain bike, or paddle.