I’m sitting at home right now, roughly a week after statewide restrictions began in North Carolina. I’ve been substitute teaching lately, and Governor Cooper closed all schools until March 30th. The school where I’ve been working has spring break after that until April 12th, so I’ve had a lot of free time on my hands.

I took advantage of some of that time to get out and ride, and last weekend, DuPont State Forest was pretty empty. 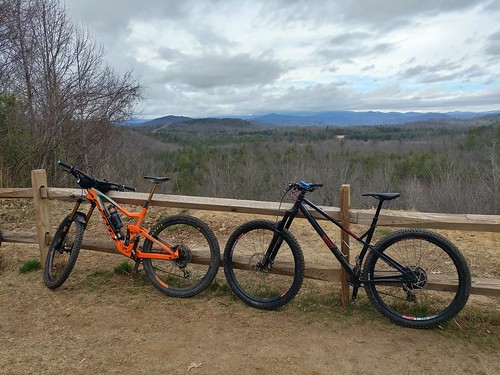 As restrictions have mounted, the trails have become even more busy. Social media pages/groups are awash with accounts of many trailheads being busier than they’ve ever been. I know it might seem like going into the woods is a great idea, but this is just stupid. Asheville, NC isn’t exactly a big city, and reports are that a great deal of the vehicles at the trailheads have out-of-state license plates.

This is not the time to make big road trips. Stay the f*ck home. Mountain towns don’t have the facilities to handle the local COVID-19 cases, local emergencies that aren’t stopping because of a global pandemic, AND your idiocy. The residents of tourist towns don’t need you bringing more cases of COVID-19 than they already have. Teton Gravity posted their own PSA about this issue.

The Eastern Band of the Cherokee have closed all public access areas, including the Fire Mountain Trails.

In fact, the first case of COVID-19 in Buncombe County was actually a visitor from New York, who most likely spread the disease around before developing symptoms and self quarantining. The first case in a resident was announced today.

I have reached the conclusion that attempting to ride my mountain bike on the trails like usual is selfish and irresponsible given the global pandemic. I have been using the extra time at home to get some work done around the house. I got my deck power washed, for example. Getting ready to paint it. I’ve had a live stream guitar lesson via Zoom with an old college friend. The house is cleaner than it’s been in a long time. I have plenty more to do.

Sure, I am still riding my bike. Given the crowding on local trails, though, I am riding at home. I’m doing skills drills in the neighborhood. I might even build a little trail in my yard once I get my yard work done.

Before you berate me for my decisions, remember that I’m a cancer survivor. I’m still somewhat immunocompromised. Other cancer survivors are being hit hard by this virus (1). I also happen to have an A group blood type, which has been linked to poorer outcomes from COVID-19 infection. I may be relatively young, but I am high risk. I am one of those people who doesn’t want to catch this virus if he can avoid it.

If you think your risk of catching the disease is low, so you’ve decided to ignore most of the precautions, I will reiterate that this is about spreading the disease to OTHER people, less so about yourself.

Another thing about being a cancer survivor trained me well for this. When I was going through cancer treatment, I was socially isolated for about 9 months. I wasn’t entirely locked away the whole time, but I did have to take notable precautions when I did go out. Far stricter than what we’re all being asked to do right now, except for maybe folks in Italy and other countries that have gone on full lockdown in an attempt to contain this pathogen.

I have a feeling that this is going to hit the United States hard…more akin to Italy than to South Korea or even Singapore. And a large part of it has to do with people treating this like spring break (1)(2)(3)(4). Just don’t. Exercise some restraint. Definitely go outside, but avoid crowds. I know that might be difficult, but a walk around the neighborhood works just as well.