I hinted at this awhile back, but ever since last year, I’ve been sloooooowly working on building a Guerrilla Gravity Pedälhead. 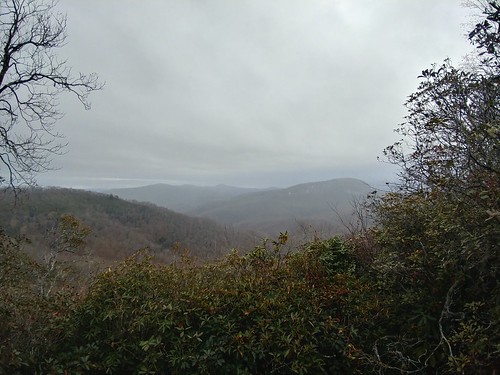 The Salsa Bucksaw I’ve been riding is a great, fun bike…but leaves a bit to be desired in Pisgah most of the time. The particular characteristic that can be problematic is its handling in high speed downhills. What happens is essentially that the suspension isn’t able to completely deal with the undamped rebound from the tires AND deal with high speed, chattery downhills full of roots and small rocks. Maybe part of it is a limitation with the Wren fork I have, but it can’t be entirely that. Either way, last summer I started shopping around for a new bike a bit more appropriate for more WNC conditions.

I decided early on that ideally, two bikes would probably suit the area well. One, a sturdy trail hardtail, and the other a full suspension in the 150mm-ish travel category. So I started out demoing whatever I could get my hands on. The full suspension bikes I tried last summer were great bikes, but they didn’t really “wow” me for what they were. I had an opportunity to demo a
Pedälhead and was instantly impressed with how fun and capable the bike was. At that point, I decided I’d start with the trail hardtail, to be especially suitable for spots like DuPont, Bent Creek, Tsali, and some of the less rowdy Pisgah stuff. 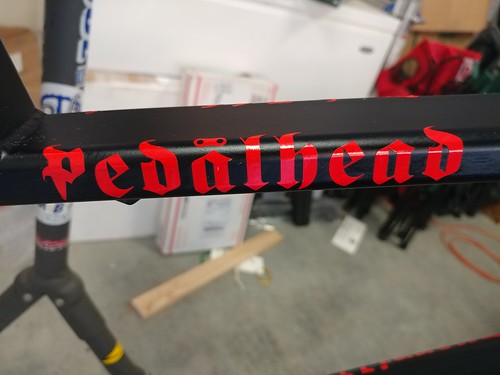 I spent MONTHS acquiring parts, and even more simply, deciding how to build it. I decided that budget wasn’t much of an object for this bike, and that I’d build it how I wanted. The only role cost would play would be how long it took to finish it. Ha. Along the way, I decided to use a heavy US-manufactured focus, because why not? 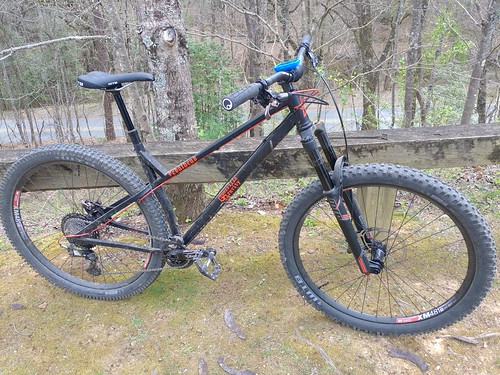 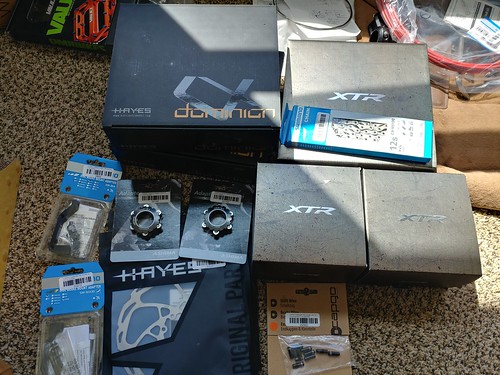 In general, I absolutely love this bike and how it rides. I’ve had a few minor component issues, some of which I’m still trying to work out. First, the issues. 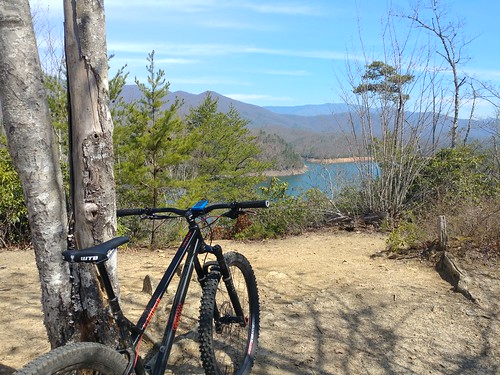 Otherwise, everything has been great on this bike. The fork is easily the best fork I’ve ever used. I’m still fiddling with the settings to get it exactly where I like it, but I think I’m close. I think going with 140mm was a good choice based on the terrain I’ll be using it on.

The brakes are absolutely phenomenal. They’re easily better than any brake I’ve ever used, too. Installation was a breeze. Modulation is excellent. Power is definitely where I want it. My goal with using big, heavy 4-piston brakes on this bike was to reduce hand fatigue on long descents. I haven’t pushed that threshold yet, but I will soon. I liked the feel of the semi-metallic pads, but the noisy rear was just too much. The metallics are great, too. Probably a better choice for when I’m pushing longer descents (generating more heat) and also for the more varied conditions I tend to deal with (wet to dry and back to wet again), though.

I haven’t mentioned it in this post so far, but I built the wheels for this bike myself, as my very first wheel build. I took a wheelbuilding class with Jenny at Appalachian Bicycle Institute and I’m so far thrilled with the outcome. It was a bit of a trying experience, though. For one, I learned that I’m a slow wheel builder. Not a problem if I’m working at home without any sort of time restrictions. But the class was 8hrs and you were supposed to be done. Well, I wasn’t even close. Part of that was my fault for forgetting parts (I forgot to put the PHR washers in my parts bag the night before and had to run home to grab them). But that alone didn’t account for all the extra time that the wheel build took me.

Thank goodness I’m local. I was able to come back on another day to work for a couple more hours and at least got the front wheel finished and the rear wheel closer. It was at this point that we noticed some kind of issue. I used 6mm of spacers according to Guerrilla Gravity’s instructions for setting the 3mm offset in the wheel build. And even though it was aligned correctly in the stand, it wasn’t aligning correctly in the frame. The stand was checked and it was appropriately centered, so the best we could figure was that the adapters we used weren’t precise enough. At any rate, we started having significant scheduling challenges for me to come back again and finish, so I just asked Jenny to finish the last bit for me. I really appreciate her patience in dealing with me. The wheels have been excellent. 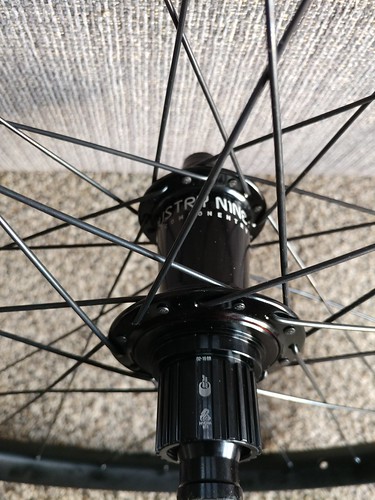 Which brings up my impressions on the Hydra hubs. I decided early that I was going to use I9 hubs in my bike build, partly to fulfill my “US Manufactured” goals, but even better because they’re closer to where I live than any other bike component manufacturer. I was going to get Torch hubs, as there’s already 1 set of those in the household (wife’s older bike), but right as I was ready to buy, I9 started hinting at something new. So I waited to see what they had up their sleeve. I got my hands on some the day of the official announcement at a local shop and decided I liked them enough to give them a go.

You can find plenty of more detailed reviews of them all over the internet, but I can say that they’re as advertised. There is less drag. They’re marginally quieter (with a slightly different tone). And the engagement is so quick it might as well be instant. I can’t say that I really notice the whole processional engagement as you put down more torque, but I trust that it’s doing its job. The biggest reason I chose to go with these were the claims of improved durability vs. Torch, and only time will tell how that plays out. 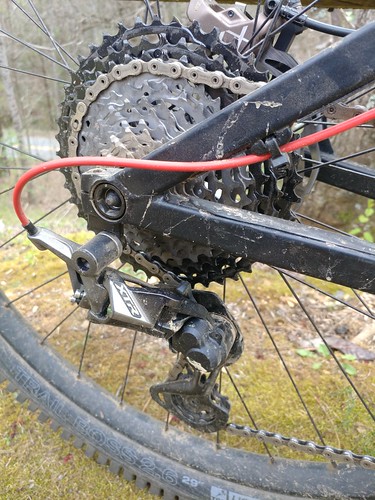 XTR M9100 is pretty fantastic, too. I’m usually not the guy who jumps in on a bunch of brand new stuff just because. I waffled quite a bit on this component decision for awhile. What it came down to for me, though, was that I saw the writing on the wall with regards to a changing freehub body standard. I see Microspline as trickling down at minimum through SLX and XT in a few years. Which means that the old school HG freehub body will wind up being relegated to fairly low end stuff, similar to how SRAM does its cassettes and freehub body interface. xD is used on its better stuff (GX and up). Old school Shimano HG on everything from NX and below. I was already spending a good bit on everything else, and figured why not – it’s only money, right? It just meant that the build would take me longer to finish.

Shift quality is outstanding. It really does shift well under power. Hyperglide+ isn’t a joke. That said, the shifter is pretty firm at its indexing points. Especially on the upshift. Cable pull is very low effort on the downshift, but those upshift index points are pretty firm. I expect them to soften up some as they break in, but if you need a really soft shifter, wait for electronic, or use SRAM. 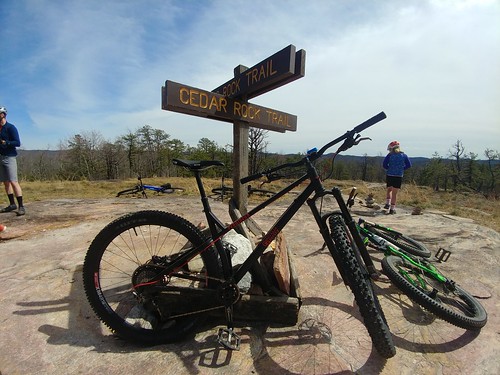 The overall ride quality of the bike is excellent. I’ve ridden it on trails in all of the places in WNC I built it to excel and it’s perfect for them. Tsali is probably the least rowdy of all of those spots, and certainly lighter tires would make for a faster xc ride in places like that, but it’s more than capable to step it up by riding rowdy lines when I encounter them. Much of the time, it’s not even glaringly obvious that I’m riding a hardtail. I’m sure a lot of that is due to the 29×2.6″ tire size I selected, but I’m sure the steel frame is a factor, too. The one time it becomes obvious to me that I’m on a hardtail is when I hit drops. It’s not harsh per se, but it’s definitely solid when I land. Just means I need to stay loose and absorb a bit more with my legs than I’m used to. 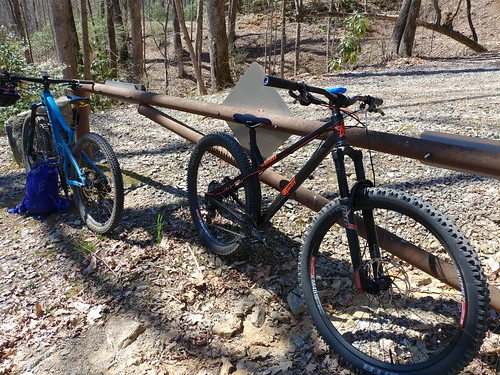 And while I don’t think you’re going to catch anyone saying that these burly WTB tires are fast tires, they are faster than I expected them to be. I’m sure part of it is that I’m coming off of a fatbike, but I’m liking the tire combo so far. Long gravel climbs have been just a little easier for me on this bike. That doesn’t make my wife very happy, but considering how much gravel climbing you have to do around here to find the fun downhills, I appreciate it. And I’ve got plenty of traction, too. So far, this is the chunkiest spot I’ve ridden on this bike, and I was comfortable enough on it, that I’ll be increasing the “chunk” factor on future rides.

I haven’t played too much with lots of handling skills, but initial impressions from the few times I’ve just “played” with the bike are that it’s much easier to get the front end up over things than my Bucksaw. The first time I attempted a mini-manual, I was a little surprised at how much higher I got the front wheel than I expected. This is good, as I’ve been wanting to work on manuals and bunny hops a bit this summer. I got gunshy with manuals on my Bucksaw after a couple hard loop-outs, and then getting the front wheel up got a good bit tougher when I installed a fork (Wren) that weighed 1lb more than the Bluto it replaced.

I’m going to be spending a lot of time enjoying the Pedälhead this year. I don’t have any delusions about how it’s going to handle on bigger, rowdier stuff. The bigger and rowdier the trails get, the more deliberate I’m going to have to be, and I’ll have to be careful about how I choose to ride things. This bike is going to handle that stuff quite a bit differently, even, than my Bucksaw does. But that’s perfectly okay. I’m having a great time with it, and that’s what matters. I’m happy to have finished the build when I did, because I can now say congratulations to myself for 10yrs of remission from AML. Cancer can suck it.